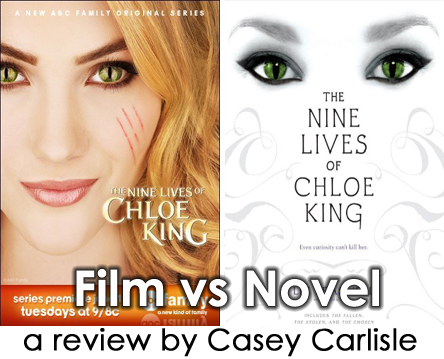 In response to the emails I’ve been getting for some more reviews since posting a blog on ‘The Host’ comparing the film to the novel; I’ll be writing more in this genre. Adding to the Film vs. Novel, I’ll also review some of the latest YA fiction from my reading list, and hopefully give you some insight into other great YA Authors.

To kick off reviews in 2014 I thought I’d begin with a comparison of The Nine Lives of Chloe King ABC’s television series to the novels by Liz Braswell – only because it was one of my favourite shows, and that in turn prompted me to read the books over the Christmas break.

Overall the television series is a sanitised version of the books – as are many adaptations these days. Keeping the broadcasts within a PG rating to connect with the intended target audience and ABC’s typical treatment of after school specials removed the ‘grit’ and realism from the storyline. But having said that, I found the characters in the television series much more loveable. The protagonist ‘Chloe’ in the books, was much harder to make a personal connection with, whereas, in episode one of the TV version – I was hooked in the first ten minutes.

Both storylines had sensational elements to add the drama and supernatural elements, but the way they were introduced into the story didn’t sell me for the novels. The written version of Chloe, a reluctant and flawed superhero, warrior princess, felt vapid in comparison to her film counterpart. Granted the version of Chloe on screen was a happy-go-lucky, sarcastic, nervous teen as compared to a bitchy, naive, and impulsive version in print, so it’s hard to pitch them up against one another when the main character is wildly different in each representation.

The books held that whole ‘secret society with lots of money operating right under your noses,’ and while that was present in the television version, it wasn’t so extreme. I loved the mythology that formed the drive for the novels and it was the main reason – apart from the love of ABC’s version – that kept me reading. If you are hoping for the same exploration with the televised version, you’ll be disappointed. There were small amounts introduced with each episode, but unfortunately the series got canned before it was able to really sink its teeth into the subject matter.

Both interpretations were a pleasurable experience, and the stand out sensation I got on completion of both consisted of – ‘Why did they cancel that!?’ when viewing the last aired episode of The Nine Lives of Chloe King… I was still totally hooked on the show. Plus it ended on a cliff hanger … argh! Frustrating! Upon reading the last page of the novels, although a satisfying read, I found myself sighing out loud many times at Chloe’s actions, annoyed that the most realistic options were never even considered, like she was being guided by the writer in a certain direction and never allowed to make her own decisions.

Secondary characters in the novels had that same frustrating trait as Chloe, resulting with me grinding my teeth. Actions they took were inconsistent with their age and the situation. Their screen counterparts were age appropriate and even quite comical at times, while not appearing two dimensional thus escaping my furrowed brow.

So in the case of TV series or novels?  – it’s a resounding win for the screen adaptation. It left me much more satisfied and had a plethora of characters to easily identify with.

© Casey Carlisle 2014. Unauthorized use and/or duplication of this material without express and written permission from this blog’s author and/or owner is strictly prohibited. Excerpts and links may be used, provided that full and clear credit is given to Casey Carlisle with appropriate and specific direction to the original content.