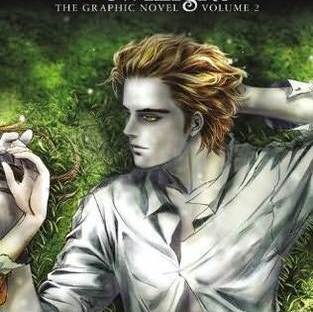 The hues of Twilight dance and glimmer in another great installment to the franchise.

Having uncovered the dark secret of her enigmatic classmate, Edward Cullen, Bella Swan embraces her feelings for him, trusting Edward to keep her safe despite the risks. When a rival clan of vampires makes its way into Forks, though, the danger to Bella has never been more real. Will she make the ultimate sacrifice to protect the people dearest to her?

Loving the artwork and new incarnation on the book that jumpstarted my reading and writing enthusiasm, I enjoyed ‘Twilight The Graphic Novel Volume 2’ more than the first volume.

My favourite scenes include the backstory of The Cullens (Carlisle and Edward) – the flashback was illustrated incredibly well. Also, I practically devoured the final fight scene and the parts of the original manuscript that were used, the reveal was done fantastically.

The use of colour in the fashbacks was a masterful touch, as to was the blur effect when Bella went under sedation. It is wonderful to explore ‘Twilight’ again in illustrated form.

Colour in the final scene felt a little washed out – I guess it was symbolising “twilight” but I wanted to be dazzled like I was in the meadow scene from Volume 1. This felt a little lack lustre for the climax of the story. Additionally, the tone this version of ‘Twilight’ ended on was a little cheesy.

But Volume 2 definitely captured more of the essence of ‘Twilight’ that was missing from Volume 1. We get the comedy and sarcasm, as well as some of the darker moments – and that was something I was praying for… thank heavens to betsy ;p

Again another fantastic addition to any twi-hard collection.

A mixed bag for my reading in November... but it's great to be feeling like I'm back in the land of the living!
The current work in progress... thought I'd post a mock up cover pic to help manifest the dream. Got 8 chapters left to write. #amwriting #amediting #justwritethedamnthing
I was appreciating the sun today amongst that chilly wind... especially since the back yard is as far as I can go for an outing right now. I should be writing, but some vitamin D is just as good.
Lil' Buster back on his first day home. Oh how he has grown.
I haven't taken a selfie since I started chemo in Aug last year - not feeling very photogenic. But now the treatment is over and I feel like I'm getting control of my life once again, thought I'd post this from 25 years ago... reminding me of fun times and to feel fearless once again. #futurefeelsbright
February reads... helping me escape. 😊
A little motivation... a little bit each day.
Last week I got nothing written... hitting the gym hard has left me exhausted and mushy brained. Though I did imagine up a 5 book series and went on a blog writing spree. But determined to complete a few chapters on my WIP this week! #amwriting #amplotting Oh, and jellybeans are a great incentive... allow 1 per page written 😉
I love reading and writing science fiction. Just trying to embody a femme fatale with the night sky in the background... you never know when you have to spring into action against an alien invasion, or leave earth on an interplanetary spaceship. #amwriting #amdreaming #mug #amreading