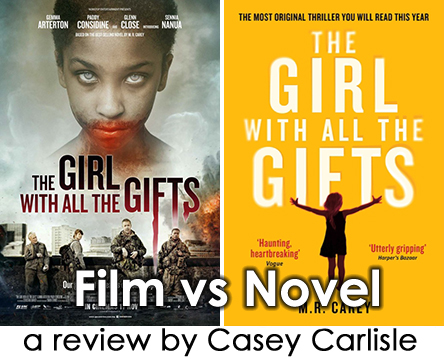 The novel by M. R. Carey got a lot of press on its release, surprisingly the film adaptation entered the market with a murmur. Which is surprising considering the big named actors in starring roles. I was wondering if the film wasn’t going to be all that good since the distributors hadn’t put a lot of funds behind promoting the movie. But it turned out to be more satisfying that I had expected.

The novel starts with Melanie’s point of view. A child in chains and strapped down, locked away in a high-security facility. We get more background and explanation of who Melanie is, and her scope of intelligence in the novel – some of it a little long winded – but both screen and written version project her innocence and curiosity while hinting at some dark danger hiding underneath. I will say that Melanie, and the other children like her, residing in the facility looked healthier than described in the novel. I didn’t get that cute-creepy-fragile-dangerous image from the actor (Sennia Nanua) portrayal of Melanie.

We also get a large helping of scientific and biological background in the novel about the epidemic and about Melanie and her class through the narrative, where in the film we get small info-dumps along the way. I think I preferred the way the movie unveiled the plot, though I felt we needed more of an introduction to Melanie and her cognitive abilities. Who knows, maybe it was there and ended up on the cutting room floor during the editing process.

One major element that annoyed the heck out of me from the film: the music was distracting and off-putting. It didn’t add to the ambiance or add feeling and tension where it was meant to. In my opinion, Cristobal Tapia de Veer did a massive disservice to the film with her soundtrack.

Glen Close added dimension to the scientist (Dr. Caroline Caldwell,) subtle hues that made her character more realistic. I felt the written version of her was too single minded at times, dangerously coming near to reading like a caricature. Gemma Arterton captured Helen Justineau perfectly, her performance depicted everything I’d seen in my head when reading the novel.

There was a certain ‘campness,’ like a B-grade horror film to the book at times, but thankfully I didn’t get any of that when watching the film. Though I will say the soldiers felt more like secondary characters in the film, where they provided over-stylized machismo in the novel that actually had me laughing.

The ‘Hungries’ seemed more zombie-like in the film because of the onmipresent viewer, where in the novel from Melanie’s POV I got more of a rabid dog/monster vibe. I would have liked to see the epidemic steered further away visually from zombies. It was getting there, but didn’t quite match what I thought was being described in the novel.

The film is definitely visually brutal. Maybe because of the changing POV’s and lengthy description in the novel, I didn’t get so much of the gore as I did from the film – the impact lessened by the amount of words in between key events. Additionally, I had a different vision in my head of the fungal ‘trees,’ nowhere near as megolithic as shown in the film. Maybe a little more like something you’d have seen on classic Star Trek episodes on some alien planet.

There were some small plot points in the film that had me going ‘huh?’ I had to flip through the book again to see if I was remembering them correctly… I won’t discuss them here though. I can see how they were included for the tone of the film and while they won’t spoil the ending, they would remove certain surprises. So I’ll say that the overall story of the film is similar to the novel, it just has a few tiny tweaks. And I put that down to M.R. Carey also having written the screenplay.

I liked the tone and perspective of the novel, and how it was based (mostly) in a youngsters mind analysing scientific data; but found the movie more entertaining (minus the weird soundtrack) and paced much better. There is definitely a stronger tie in to the Pandora metaphor in the film – but doesn’t have the speculative ending like in the novel.

On a side note, I’m glad they kept with the original name of the novel for the film adaptation, I know they were tossing around ‘She Who Brings Gifts’ for a while.

It’s a close battle to which I prefer, but I’d say the film only just scrapes in above the novel, based on more realistic depictions of the cast, pacing of the story, and the symbolism throughout – all keeping in the same tone for the film throughout. The novel, while wordy, suffered pacing in parts, and some of the scenes felt forced or unrealistic, though much more creepy than the film.

Go check out the film.