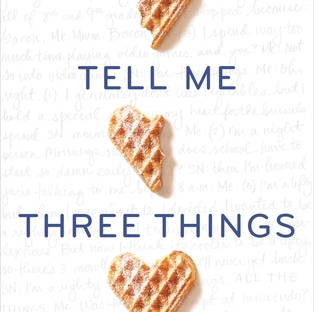 Everything about Jessie is wrong. At least, that’s what it feels like during her first week of junior year at her new ultra-intimidating prep school in Los Angeles. Just when she’s thinking about hightailing it back to Chicago, she gets an email from a person calling themselves Somebody/Nobody (SN for short), offering to help her navigate the wilds of Wood Valley High School. Is it an elaborate hoax? Or can she rely on SN for some much-needed help?

It’s been barely two years since her mother’s death, and because her father eloped with a woman he met online, Jessie has been forced to move across the country to live with her stepmonster and her pretentious teenage son.

In a leap of faith—or an act of complete desperation—Jessie begins to rely on SN, and SN quickly becomes her lifeline and closest ally. Jessie can’t help wanting to meet SN in person. But are some mysteries better left unsolved?

I really got a kick out of ‘Tell Me Three Things,’ it weaves poetry, pop culture, and social media neatly into the narrative. Though I did feel like the pacing was somewhat slow. The truth is not a lot happens in this book, however I wasn’t bored by any means. It has that type of quirkiness that I’ve come to like from titles by David Levithan. Imperfect characters, big city sarcasm, and witty dialogue.

The whole SN (Somebody Nobody) thing was a little trite. I liked it having an anonymous person to chat to as a story telling device – a Cinderella story in reverse of sorts, but in a world of social media awareness and predators, something was screaming in the back of my head that our protagonist Jessie was being gullible.

I related to Jessie and got all the feels. I’ve lost a large number of family members in the last three years, and the grief is still raw, so there were times I had to put this book down because I couldn’t breathe. Many of her words rang so true. It’s not something anyone can understand unless it’s happened to them. I related to her quiet bookishness, her nerdiness, but I felt like she should’ve had more of a backbone. Especially when dealing with her Father. I know I would have totally lost it much earlier, and had a major meltdown at his feet and blame him for everything. That’s what grief can do to you. It also makes you numb. Maybe it’s my own experience colouring my views on Jessie and how she handled everything. I wanted her to be a little more prickly, fragile, volatile… maybe to validate how I handled my own grief and loss.

I felt the ‘all the boys fall for the new girl’ thing was a little over done. Whether intended or not. Whether stated or not. It just felt that way; and it annoyed me to no end. But the relationships, be they potential romances or not, were all very cute and adorable. I actually had a lot of fun reading ‘Tell Me Three Things.’

Caleb, Ethan, and Liam felt interchangeable. Like there wasn’t a lot of difference between them. SN had more depth than any of these men. And Jessie objectified them most of the time. Their floppy hair, their piercing eyes… I was waiting for her to discover more.

I also liked how I was kept guessing about the identity of SN. I kept trying to sleuth it out myself – like who would have access to her private contact details (this fact alone which threw me in the wrong direction – and to which I’m still wondering about how SN got them in the first place). Buxbaum does a very good job at swaying opinion from one person to another through Jessie’s narrative. I finished the whole book in a day, even with many rests to pull my emotions back together, it’s a touching contemporary about finding yourself through the loss of a loved one and re-defining what it is when you are You, who is You, who is You.

And I totally mis-guessed who SN was.

The ending was cute.

I guess this book on a whole, although adorkable, had a tone of the uncomfortable. The grief and loss thing, the internet predator issue that was ignored, the feeling lost and out of place… it was hard for me to get engrossed in the romance when these issues were like the elephant in the room. It could have been so much more intense and angsty, but I appreciated the light nature of the narrative – it let me live in the fantasy.

Like I mentioned earlier, I found the pacing a little slow, but the writing style is easy to read and littered with pop culture acronyms (some of which I had to look up) and random references (which I Googled too): all of which I love. It sounds lame, but I always get a kick about learning something new from a book, no matter how obscure the reference. A big two thumbs up from me.

Overall feeling: cute and sad at the same time.