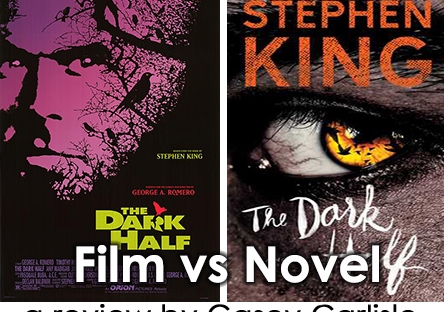 What would your bad side be like, and how would you confront it?

The opening chapter of the novel does not pull any punches and immediately throws some gore and a shiver up your spine. We get further hits of this through antagonist George Stark’s point of view scattered throughout the book, his actions are truly grotesque… I wanted to cover my eyes until it was over – but of course you can’t do that if you’re reading. The film, consequently took a while to get going, and the SPFX felt a touch amateurish, but was most likely state of the art for the time of its release in the ‘90’s. I don’t think ‘The Dark Half’ took the time to build a creep factor as much as his other film titles.

I felt moments in-between when reading, where the narrative dragged out – embellishing characters and their back-stories, or descriptions of the landscape of the novel that slowed the pace and had me speed-reading through. Though my interest in the novel never waned. I always wanted to know what was going to happen next. Eager to learn the secrets of protagonist author Thad and his alter ego Stark. I actually watched the movie in three chunks because of the same issues in pacing – which is not something you want in a horror/thriller.

Thad was an interesting protagonist (played by Timothy Hutton). I related to him immediately being a writer, and how he would get lost in a fugue of writing as if being taken over by another presence entirely. Though the smoking, drinking, patriarch stereotype that edged its way into this character annoyed me a little. But on the whole I found Thad to be intelligent, imaginative and a real risk taker; all with layers of love and compassion. I found perfection in his layers of imperfection. We did not see this set up in the film however. It starts with a montage of Thad’s past and then starts the film off in present day. We don’t get to see the duality of Thad as succinctly as in the novel. And while he is set up to be a family man, there isn’t time to explore the depths of his personality.

His wife, Liz – of which I frequently was reminded of the phrase about poking a mumma bear with a stick when her twin children were threatened. Liz was always the quintessential homemaker, adoring her little family and supporting her husband. But the moment any of that was endangered she roared and snapped like a wild animal. Her protective spirit and tenacity created a deep respect. She was part of the team and very present in scenes with Thad in the novel. Comparatively her screen version played by Amy Madigan was watered down. We did not get to see her strength and though front and centre in the storyline, wasn’t as essential in the plot.

Our straight-man (so to speak) being Sheriff Alan Pagborn filled the much needed critic against the supernatural. He guides the reader and grounds the narrative. The sceptic who deals only in facts and proof to form a conclusion. His added point of view helps to add credence to the theories Thad and his wife instinctually know. I loved his character in the book – the one person a reader is to use as a voice of reason. Not so in the film. He felt more like a plot device to counter the supernatural and be there at the end to witness the strangeness so it couldn’t be written off as imagination or a crazed Thad. We also never get to see the husband and wife team follow their hunches with uncanny supernatural radar – it was reduced to a raving and yelling Thad for a few scenes. The dynamic between these three characters is lost in the movie version.

I found the cast interesting, fully developed and added something unique to the story line, ultimately rounding it in some realism. Though the plot itself did fell drawn out a little too long, the journey there was paced well and held my interest. Stephen King’s writing style is prominent, though more intimate than his earlier works. For a novel nearly 600 pages long, I seemed to fly through it. But the film felt disjointed – subsidiary characters revealed plot points way to early destroying any unexplained evil phenomena to tease and scare us. I feel there was even some missed opportunity to creep us out even further with some of the murder scenes – especially when Stark and Thad are in the same locale.

I was a little disappointed in the mythology of the novel – I’d read about the significance of sparrows before in Trent Jamison’s Deathworks novels, so this aspect was not a huge surprise to me; though Thad’s role felt like it was left hanging. Why had this event taken place in the first instance? Does Thad have some sort of ability? Was it Stark all along, clawing his way back from some dark place? I felt like I was wanting more resolution to this, or even a paragraph explaining why, but we didn’t get an answer in the novel. Comparatively, we get more answers in the film, but they fall flat. And the climactic scene felt comical. In the novel there is more of a struggle between Stark and Thad, and more of a symbolic changing of places before the final showdown. Even Thad’s twins were much more involved. There felt like there was a lot at stake, more paranormal forces in play for the novel – the film just showed one scene with special effects and that was it.

I’ve read creepier, gorier books from King. But I have to say, ‘The Dark Half’ had just enough of both to satisfy this genre without making it difficult to read. The thriller-suspense is light, but a great story to ignite the imagination of any wanna-be writer. But the film was no-where near what I expected it to be. The suspense and build were not executed strongly enough, and I hoped for more of an air of mystery around the paranormal events, but they were explained away far too quickly and easily.

The novel could have been a tad shorter, a tad more intense, and ended with more of an exclamation point, but I’d be happy to recommend to all. I’d have to rank it in the top half of my King favourites. The film however, though entertaining in a nostalgic B-grade horror film sort of way, I’d happily miss, especially since it was two hours long. Definitely the novel for the win J