The final book in the Hex Hall trilogy brings all the gouls to the yard. 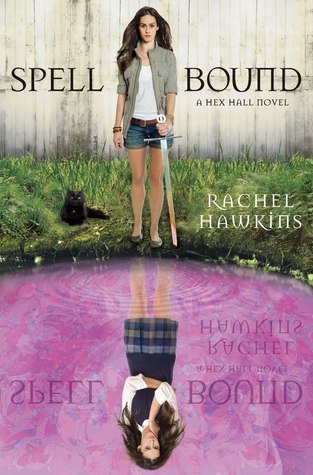 Just as Sophie Mercer has come to accept her extraordinary magical powers as a demon, the Prodigium Council strips them away. Now Sophie is defenseless, alone, and at the mercy of her sworn enemies—the Brannicks, a family of warrior women who hunt down the Prodigium. Or at least that’s what Sophie thinks, until she makes a surprising discovery. The Brannicks know an epic war is coming, and they believe Sophie is the only one powerful enough to stop the world from ending. But without her magic, Sophie isn’t as confident.

Sophie’s bound for one hell of a ride—can she get her powers back before it’s too late?

Still loving this trilogy, the humour, the sass, the magical goings-on. We still get a few unexpected twists, but for me this conclusion wasn’t as quite as fantastic as I thought it would be. It was still Hawkins’ phenomenal writing, and the epic battle scene was amazeballs, but it felt like it was over in the blink of an eye after a massive build-up. It was all kinds of crazy and culminated in epicness.. but it still felt like it was missing something. Maybe I was expecting more of an emotional note? Am I getting spoiled for choice in my reading habits and continually raising the bar in what amazes me? Who knows exactly. While I loved ‘Spell bound’ and found it thoroughly entertaining and clanged the bells for all things YA that I lurve, there was that little something when I finished that whispered in my head that I was needing something bigger…

Our protagonist Sophie was her usual sarcastic self, and I LOL’d many times at her witty one liners, though you get a sense of her beginning to put the humour-masking-fear reaction aside by the end of the novel, showing some of the growth her character is moving through. I did feel that some aspects of her story were rushed, and it felt like we jumped around a bit – location wise and narrative wise. Yes, the story was broken into three parts, but ‘Spell bound’ didn’t have the cohesion its predecessors had.

Cal felt a bit more like a prop in this story… he slowly blended into the background, as did Jenna, Sophie’s vampire best friend. But I can’t fault Hawkins – there was so much going on and the plot blasts forward so quickly that having these two more prominent in the narrative would have been detrimental to the story. The four of them (five if you count Elodie the ghost) formed the best little Scooby gang. I enjoyed this series more than I did the Rebel Belle trilogy.

We get all the answers to the mysteries, and then some. Snippets of backstories are brought to light in a very organic way. But there is still some elements of the mythology that are left floating in the ether, but on the whole this novel wrapped up the trilogy nicely. There is a companion novel, ‘School Spirits,’ which I am definitely going to purchase next. I’m interested in Izzy’s story and hopefully get some more exploration on the Council and Prodigium’s history in the Hex Hall Universe.

I was really impressed with Hawkins writing style, the quips, the description, the pacing. It felt compact, relevant and full of pop culture. I’m kinda wishing this was a longer series because I fell in love with all the characters so much. Maybe Hawkins will revisit Hex Hall again with another great adventure for our misshapen band of teen heroes?

I wonder is Hawkins had every intent to continue with this Universe with the addition of ‘School Spirits’ and much left unsaid – but nothing new has been written since the latest book was published in 2013. But highly recommend this collection, its fun, quick-paced, and quippy YA at its best.

Overall feeling: Fills me with 90’s nostalgia and all kinds of paranormal adventure.