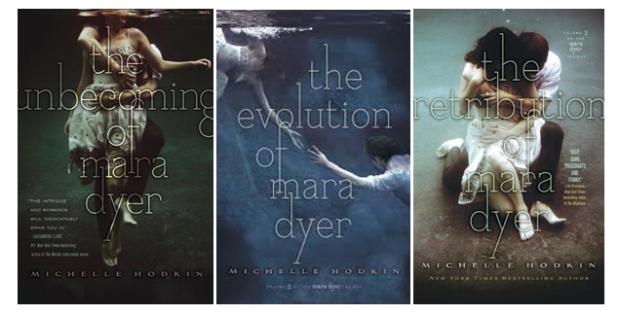 I read this collection spread out over just under four years! I think because the middle book disappointed me after the stellar impression from the debut, I was reluctant to pick up ‘The Retribution of Mara Dyer’ for a while after its release.

And a friendly warning: this is a wrap-up, so it discusses many elements with the plot, so avoid reading if you don’t like *spoilers!*

I was blow away with the debut. Hodkin’s writing is eloquent and haunting and I loved the analytical introspection of the protagonist. Plus the paranormal mystery storyline mixed in with a bit of thriller kept me engaged. A rich tapestry of characters that you don’t get a lot of in YA had me singing its praises to anyone who’d listen. And then the sequel “The Evolution of Mara Dyer’ put a big spanner in the works. The narrative moved away from the paranormal mystery/thriller, to that of a contemporary dealing with mental illness. We still get all the supernatural elements, but find ourselves embroiled in something that floundered about. Mara was not sure of anything –and as a result, I had no clue where the story was going. The pacing slowed right down because we were dealing circle shares and lengthy introductions to new cast members in the Sanatorium. I missed the tone of the debut and consequently was not too eager to pick of ‘The Retribution of Mara Dyer’ when it was released.

After reading many rave reviews for the conclusion for this trilogy, I finally got around to reading it and my faith was just about fully restored. Though the genre was approaching more sci-fi than paranormal. Experiments for developing abilities – and mental illness the cost of acquiring such abilities is a fantastic concept. I was a touch underwhelmed about this explanation. The hint of past lives and ghosts from the first novel is what had interested me in this series initially.

This series is the first that I have read in YA with a darker tone to it, and I really can’t hype Hodkin’s writing enough. She is a sheer genius with her turn of phrase. What started out as feeling like a paranormal thriller, morphed into a gothic romance. So it was a bit of a rocky road with this trilogy, but definitely gets two thumbs up from me.

Of course we can continue in this universe with the latest releases of The Shaw Confessions, of which I am keen to collect and read. ‘The Becoming of Noah Shaw,’ ‘The Reckoning of Noah Shaw,’ and a third yet untitled volume to be published in 2019. Let’s hope it continues with the timeline and does not suffer the middle book slump.

‘The Unbecoming of Mara Dyer’ – https://strokingfire.wordpress.com/2014/08/26/book-review-the-unbecoming-of-mara-dyer/

‘The Evolution of Mara Dyer’ https://strokingfire.wordpress.com/2014/10/08/book-review-the-evolution-of-mara-dyer/

‘The Retribution of Mara Dyer’ – https://strokingfire.wordpress.com/2017/07/19/book-review-the-retribution-of-mara-dyer-by-michelle-hodkin/