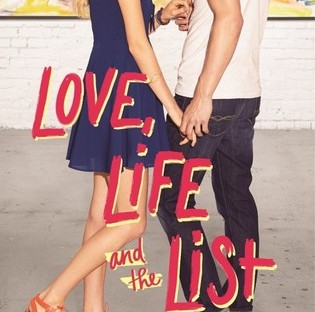 An idea to broaden one’s horizons for the sake of art – great idea, flat delivery.

Seventeen-year-old Abby Turner’s summer isn’t going the way she’d planned. She has a not-so-secret but definitely unrequited crush on her best friend, Cooper. She hasn’t been able to manage her mother’s growing issues with anxiety. And now she’s been rejected from an art show because her work “has no heart.” So when she gets another opportunity to show her paintings Abby isn’t going to take any chances.

Abby gives herself one month to do ten things, ranging from face a fear (#3) to learn a stranger’s story (#5) to fall in love (#8). She knows that if she can complete the list she’ll become the kind of artist she’s always dreamed of being. But as the deadline approaches, Abby realizes that getting through the list isn’t as straightforward as it seems… and that maybe—just maybe—she can’t change her art if she isn’t first willing to change herself.

Another cutesy addition to my collection of Kasie West novels. But this one feels average in its place of West novel rankings. ‘Love, Life and the List’ lacked complexity, and quite frankly, failed to drag out any of the feels. Where some of her novels feel like a blockbuster rom-com, ‘Love, Life, and the List’ felt like a made-for-tv movie on the Hallmark channel. Not that it is any way a bad thing, just that it felt like it lacked layers and sophistication. I wasn’t even feeling the angst. For some, this might be the death knell for a book. But we still get West’s ever-present positivity and sunshine. Cuteness overload. It’s vanilla, very vanilla. Which is great for an afternoons escapism when you don’t necessarily want to be dragged over the coals of hurt and pain to get some character development, and where you know you’re going to get happy smiles at the end.

Our protagonist Abby felt a little flaky, though I love how she decided to challenge herself with ‘the list.’ Notably, her achievements weren’t character defining, but merely experiences to help broaden her worldly view.

The chemistry between love interest Cooper was already existing – like an old married couple – so there wasn’t a lot to expand on. So consequently the vibes between these two felt a little flat. And also because the ‘G’ rating of this book don’t expect any twixt of your nethers, or engorging love scenes. This is very Disney.

But the concept is intriguing… like a bucket list for personal growth. Testing out things you know to be true. And West does write an interesting complementary cast. Addy’s mother was a great addition to the story struggling with anxiety, and the all-knowing-but-hip grandfather was endearing. He reminded me of ‘Pop’s’ from ‘The Goldbergs’ in a way.

So while I enjoyed this book, and had a pleasant afternoon whiling in its pages – for the most part it’s forgettable. I think if there were some bigger challenges to test Addy personally and emotionally, and a more dynamic storyline with an arc or two thrown it, it would’ve ticked all the boxes for me.

I still enjoy West’s writing style, it is so easy to fly through, and just descriptive enough to let your imagination fly.

This is the start of a trilogy of companion novels, so it may have felt flat because of setting up all the characters in this universe (but it didn’t really feel like that) so we’ll see what characters take the torch in the next few novels and how they stack up against ‘Love, Life, and the List.’

Only recommend for hard core West fans, and younger readers with a thing for contemporary romances.