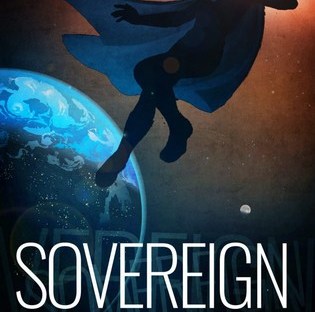 Only nine months after her debut as the superhero Dreadnought, Danny Tozer is already a scarred veteran. Protecting a city the size of New Port is a team-sized job and she’s doing it alone. Between her newfound celebrity and her demanding cape duties, Dreadnought is stretched thin, and it’s only going to get worse.

When she crosses a newly discovered billionaire supervillain, Dreadnought comes under attack from all quarters. From her troubled family life to her disintegrating friendship with Calamity, there’s no lever too cruel for this villain to use against her.

She might be hard to kill, but there’s more than one way to destroy a hero. Before the war is over, Dreadnought will be forced to confront parts of herself she never wanted to acknowledge.

And behind it all, an old enemy waits in the wings, ready to unleash a plot that will scar the world forever.

I enjoyed ‘Sovereign’ much more than ‘Dreadnought.’ There wasn’t any of the identity issues that didn’t sit well with me from the debut. Here we see protagonist Danny solidly in her role of superhero, and no longer needing to justify her affirmed and presented gender and role. Characters and forces working against her are aplenty, both in terms of accepting her transformation, and super powers. The story felt grounded.

This was full of action. I was transfixed from the start to the finish. I would’ve completed it in one sitting if my eyes weren’t growing heavy as it got late in the night.

Danny’s friendship with Calamity was strained and weird for the first half of the novel – and I didn’t feel like it was totally justified. But is was beautiful to see their relationship grow and change. Android and hero support, Doc, was my favourite, and she managed to ingratiate herself further into my heart through ‘Sovereign.’

We see many characters return, and some new ones get introduced as threats remaining over from ‘Dreadnought’ and new ones raise their heads to challenge Danny in some awesome fights. I will say towards the end, I was on the edge of my seat, though the climactic fight lacked some emotion and anticipation. I’m loving the way April Daniels crafts battle scenes, but terms and sentence structure became a bit repetitive to zing some of the energy out of those encounters – but that is me being really, really picky.

There is a lot of politics in this one. It’s kind of an undercurrent of the whole series – I feel like it’s mirroring an observation of the current climate of the real world in dealing with discrimination and laws for LGBT rights.

Really looking forward to the next novel in this series – with the jump in improvement between ‘Dreadnought’ and ‘Sovereign,’ the third novel could be outstanding!

We’re still needing to address the Nexus (and Professor Gothics role), closure with Danny’s parents, the fate in the direction of the Legion, and I’m wanting to see what happens between Danny and Red Steel: it feels almost flirtatious.

I’m on the fence with recommending ‘Dreadnought,’ due to the issues with how it handles Danny’s transformation and adaptation to her new gender, but I’d be happy to recommend ‘Sovereign.’ So once you get over that initial hump this series really starts to take off.

One thought on “Book Review – ‘Sovereign’ (#2 Nemesis) by April Daniels”