Drag of a different note… 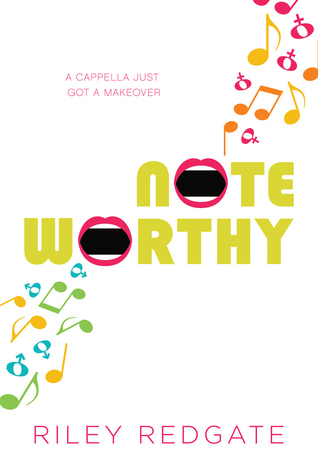 A cappella just got a makeover.

Jordan Sun is embarking on her junior year at the Kensington-Blaine Boarding School for the Performing Arts, hopeful that this will be her time: the year she finally gets cast in the school musical. But when her low Alto 2 voice gets her shut out for the third straight year—threatening her future at Kensington-Blaine and jeopardizing her college applications—she’s forced to consider nontraditional options.

In Jordan’s case, really nontraditional. A spot has opened up in the Sharpshooters, Kensington’s elite a cappella octet. Worshiped…revered…all male. Desperate to prove herself, Jordan auditions in her most convincing drag, and it turns out that Jordan Sun, Tenor 1, is exactly what the Sharps are looking for.

Jordan finds herself enmeshed in a precarious juggling act: making friends, alienating friends, crushing on a guy, crushing on a girl, and navigating decades-old rivalries. With her secret growing heavier every day, Jordan pushes beyond gender norms to confront what it means to be a girl (and a guy) in a male-dominated society, and—most importantly—what it means to be herself.

This was a fun book to read. Once I picked it up, I could not put it down until I reached the last page.

For the most part I enjoyed protagonist Jordan, I felt she was a fun and adventurous. I also liked how she thought about trespassing on other minority group’s territory; I.e. transgender men, gay men, and feeling like an impostor and essentially wondering if the act of disguising herself as a guy was itself was discrimination. Not as gender expression, but for a chance to join a singing troop. It can certainly be viewed that way, but in another light completely harmless. It’s all about perspective.

I enjoyed how you didn’t get a sense this had a love story in it, but I knew Jordan was going to meet a man from reading the blurb, and it was fun trying to sleuth out which person it would be. I like that is wasn’t clear until the near of the novel, because different people’s reactions played out in realistic and organic ways.

I was horrified about a certain elevator scene – I get the point of gender roles being reversed and it not being made such a big deal of – but in the aftermath (and reveal) I wondered if her fellow Sharpshooter Isaac who was in the elevator with her and listened to her drunken ramblings, then went around exposing Jordan, how nothing was brought up about that altercation. It didn’t play to bolster Isaac’s character at all.

This is so full of drama and angst I was glued to the page.

I liked the social commentary on gender, gender roles, gender identity, and sexuality. It is such a big jumbled mix and really hammers home that we are all simply human – in all different shades.

The boys of Raven (The Sharpshooters) each had their own distinct personality, and really added colour and complexity to the world of Kensington-Blaine’s College Campus (and a great example of fantastic writing and character development.)

I’m not a big fan of poetry or song lyrics in novels – they lose their context and meaning in this medium, and I ended up skimming past the lyrics to get back into the narrative. But it’s a personal preference, some readers may enjoy the cadence. I have to admit, I learnt a lot about music and a capella just from the language used and descriptions of the group trying to pull a number together for a performance. So intricate – it really helped paint a picture in my head of how they actually sounded: which is a phenomenal task creating an imaginative aural sound from a sentence written on a page.

I think the ending was oversimplified (maybe a little trite,) but to be fair, if it wasn’t executed in this manner the book would have dragged out another couple of hundred pages. It was a cute tale. Tones of ‘A Mid-Summer Nights Dream,’ ‘Milly Willy,’ and ‘She’s the Man…’ playing with gender roles can be fun. But with such a heavy subject matter like identity and gender roles, ‘Noteworthy’ was wrapped up too quickly and too nicely. I found myself wanting a more resounding conclusion. But what a fantastic writing style. I remember the first few sentences and how expressive they were in setting a great tone for the novel.

It is predictable in that it wouldn’t be a story without Jordan getting found out – so that part was easily foreseen: but the things Jordan went through was waaay more out of the box than I had guessed. I’d expected some hijinks, but this was visceral and poignant. A great social commentary.