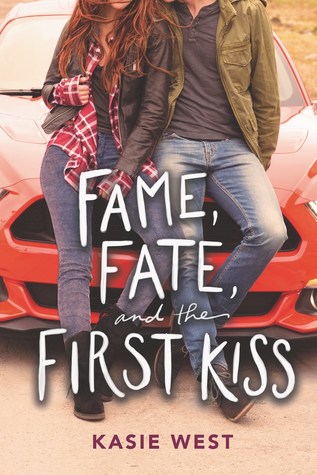 Lacey Barnes has dreamed of being an actress for as long as she can remember. So when she gets the opportunity to star in a movie alongside one of Hollywood’s hottest actors, she doesn’t hesitate to accept the part.

But Lacey quickly learns that life in the spotlight isn’t as picture perfect as she imagined. She’s having trouble bonding with her costars, her father has hired the definition of a choir boy, Donavan Lake, to tutor her, and somewhere along the way she’s lost her acting mojo. And just when it seems like things couldn’t get any worse, it looks like someone on set is deliberately trying to sabotage her.

As Lacey’s world spins out of control, it feels like the only person she can count on—whether it’s helping her try to unravel the mystery of who is out to get her or snap her out of her acting funk—is Donavan. But what she doesn’t count on is this straight-laced boy becoming another distraction.

With her entire future riding on this movie, Lacey knows she can’t afford to get sidetracked by a crush. But for the first time in her life Lacey wonders if it’s true that the best stories really do happen when you go off script.

It looks like Kasie West is back on her winning formula. Another enjoyable escapist romance with ‘Fame, Fate, and the First Kiss.’

Set in the same universe as ‘Love, Life, and the List’ we follow protagonist Lacey, and aspiring teen actor in her first big movie role as a zombie. Only she has a helicopter/hover father and schoolwork to contend with as well as her acting job. Enter the cute tutor Lacey’s father hires to ensure she at least gets a passing grade, because, you know this whole acting thing may just be a whim no matter how serious, and how long Lacey has taken on being an actor. Tutor Donavan is straight-laced and all business. The business of learning. Only adding to Lacey’s daily pressures. Then little things start to go wrong on set… nothing like piling on the stress.

Again this is a cute contemporary, a quick read, as West has established as her brand. It didn’t quite have the quirky field of characters as her earlier works, but ‘Fame, Fate and then First Kiss’ still managed to captivate my attention and keep me engaged until the end. Lacey is cute and sassy but with a mostly level head. I almost wanted her to be a bit more headstrong to create some more tension. Or at least something so she wasn’t so… vanilla. So to with her love interest Donavan. He was very much a perfect wish-fulfilment type of guy. I’m used to a bit more character from West’s leading men.

Contrasting that we have some of Lacey’s co-stars who are very sure of themselves (or very full of themselves) which added some colour to the mix.

I did love the small mystery plot line as well; it helped keep the pace and tension right to the end, rather than this being an angst-fest. So a slightly different tone to West’s usual fare, but a welcome change. Though, please bring back those interesting characters…

There is not necessarily a lot of character development, rather more of a burgeoning understanding and better lines of communication being established. So while the plot is mostly predictable (small mystery aside) and because of the ‘vanilla’ characters and less angsty storyline, the pay-off wasn’t as great as I was hoping. Though still entertaining and definitely a step in the right direction after a lull in late 2018 to early 2019.

I liked the connection to Abby  and Cooper and am looking forward to the final book set in this universe ‘Moment of Truth’ to be released in March 2020.

A solid entry into my guilty pleasure collection, though I wanted a bit more complexity of plot and a dash more interest in the cast. Recommend to lovers of teen YA romances, it was a pleasant way to wile an afternoon on the lounge with a hot cup of tea.