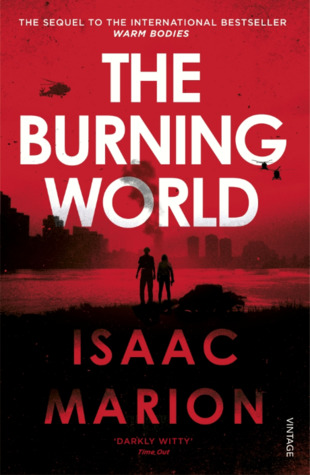 A romance between a zombie boy and a human girl is bound to have its problems, but after battling against the odds and the undead, it seemed that Julie and R had earned their happy ending. But they soon must face a new enemy more terrifying than the walking corpses that still roam the wasted cities: a faceless and merciless corporation who are seeking control of the ruins of America. The key to survival and victory may lie in R’s past life, but can he finally face his own demons?

This almost feels like a road trip novel. The characters go from A to B and some plot points are tied up and some aren’t… it seems like this would suffer a middle book syndrome, but it doesn’t. To be honest I was a little worried going into to ‘The Burning World’ with its 500 page length for a zombie dystopian, it has the potential to have an ambling pace, but Isaac Marion put his foot on the accelerator and did not let up until the end. It was a journey with so many things coming at the characters hard and fast.

You get a real sense of humanity through the characters, they react in a realistic way to the circumstances they face. ‘The Burning World’ picks up just after the events in ‘Warm Bodies.’ I’d say this novel primarily deals with filling in R’s backstory. It gives us a hint about the start of the zombie virus, but not quite. I’m hoping it all comes to light in the last book of the franchise ‘The Living.’

There are a lot of interesting elements in ‘The Burning World.’ We get interspersed chapters following a younger R; A young Nearly Dead boy with amber eyes; and some collective consciousness observing the planet and its evolution that seems to have some sort of vast knowledge. There was something like that in ‘Warm Bodies’ with the Boneys – but we don’t see them in this book. There is a sense that everything is connected, that a tangled mess of plot points is being set up. I’m hoping for an epic conclusion.

Isaac Marion’s writing style is both concise and poetic. Descriptions and actions are written with brevity, but philosophy and ambience are waxed lyrical. It is a unique and interesting tone of voice to read.

There does not feel like a tonne of character development. R’s eyes and personality are growing both with the return of his memories, and seeing Julie in the differing scenarios they survive. The other characters have minor realisations of their own, but nothing that pivots or redirects the plot. As you can guess I’m saying this is a plot driven story, rather than a character driven one.

It’s hard to say I predicted anything about ‘The Burning World’ because I didn’t really know where it was heading… and the journey is still yet to be completed. We get enough plot points resolved to finish the novel at a natural point and felt satisfied, but it didn’t altogether feel like a resounding conclusion. I was surprised at many of the elements introduced in this novel – ‘Warm Bodies’ feels simplistic in comparison.

Definitely looking forward to ‘The Living’ to complete the story and see where this all leads. Recommend this to fans of ‘Warm Bodies’ and any of the zombie and dystopian niches, but you must get your hands on both ‘The Burning World’ and ‘The Living’ to skip disappointment. (Luckily I have my copy waiting to go.)