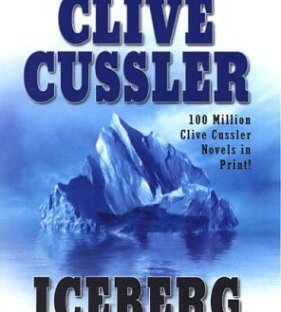 A clusterf*#k of political incorrectness. 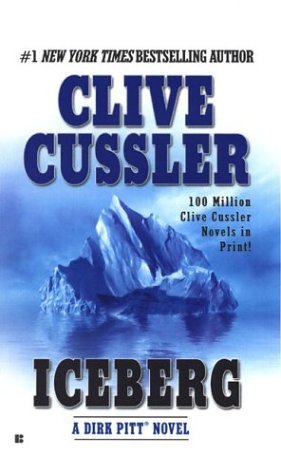 Frozen inside a million-ton mass of ice-the charred remains of a long missing luxury yacht, vanished en route to a secret White House rendezvous.  The only clue to the ship’s priceless-and missing-cargo: nine ornately carved rings and the horribly burned bodies of its crew.

I’ve been a fan of Cussler since my teen years, but this singular novel really tested my nerve. I can forgive a little machismo – it’s to be expected in this genre and series, but when Cussler has Dirk Pitt playing a stereotype of a gay man – even so far as to use the word faggot a number of times, I wanted to set the book on fire. It was in such poor taste to read these hate-filled slurs. It highlights all the issues of discrimination that the LGBTQIA+ community face.

Cussler used about every negative trope around this issue in ‘Iceberg’ with the protagonist Dirk Pit undercover as a homosexual artist, staring hungrily at men’s crotches like a sexual predator, acting submissive and weak, wearing over-the-top colourful clothing, and flowery speech. This goes on for half the novel. It is obvious that Cussler adopted this writing style for it to come off as comedic, but it just shows his insensitivity and ignorance.

To compound the issue there are continual cracks about crazy women and menopause, or someone on their period – that was also meant to be jocular. The female characters were irrational tittering things meant to look pretty and fetch coffee. Their only goal to land a good husband. They were diminished to a sexual object, nursemaid, or servant. It came off as highly offensive.

I just don’t understand. Was Clive Cussler on some sort of acid trip writing ‘Iceberg?’ I’ve read over 15 of his novels and never come across such blatant misogyny. Maybe I should stop making allowances for Cussler’s overused tropes and start calling him on them in my reviews… I read his novels for the emphasised adventure, the marine environment, and the espionage. ‘Iceberg’ was overshadowed with such a distasteful display of tropes and writing I am literally gobsmacked. Way to offend half your audience dude.

Looking at other aspects of ‘Iceberg,’ like pacing and plot, it wasn’t so bad, but by no means anywhere near his best. There was a plot twist at the end that I didn’t see coming, but that too left a horrid taste in my mouth. I enjoyed the surprise, but hated the premise it supported.

In all honesty I do not recommend this book to anyone. If fact Cussler should pull it from his catalogue entirely. I know I would be ashamed to have written a novel like this.

Dirk Pitt is borne of pages and a passion for oceanic adventure!

Dirk Pitt’s first, most terrific adventure! Dirk Pitt, death-defying adventurer and deep-sea expert, is out to the ultimate test as he plunges into the perilous waters of the Pacific Vortex — a fog-shrouded sea zone where dozens of ships have vanished without a trace. The latest victim is the awesome superb Starbuck, America’s deep-diving nuclear arsenal. Its loss poses an unthinkable threat to national defense. Pitt’s job is to find it, salvage it, before the sea explodes. In a furious race against time, Pitt’s mission swirls him into a battle with underwater assassins-and traps him in the arms of Summer Moran, the most stunningly exotic and dangerous toward disaster, Clive Cussler plummets his hero onto an ancient sunken island-the astonishing setting for the explosive climax of Pacific Vortex!

In the past I’ve really enjoyed the Bond-esque adventures of Dirk Pitt, and having been away from his action packed crusades for many, many years, I decided to catch up from the beginning. A goal of reading all the Dirk Pitt works from beginning to end and fill in the gaps of books I’ve missed.

‘Pacific Vortex!’ was better and worse than many of the other books I have read…

Better, because it really invoked a feeling of fear and anxiety around some of the undersea challenges Pitt faced, as well as the adrenalin filled awe at the scale and grandeur of the mysteries of the deep. I don’t think the other novels in this universe I’ve read quite captured that feeling as effectively.

Worse, because of all of the trappings that go along with a terminal bachelor ladies action man. So many archetypes which felt two dimensional and had me cringing. But I was expecting this. Dirk Pitt adventures are typically patriarchal, male-centric and reduce many interactions to machismo and objectification. It’s the same in the Bond franchise. The spoony and camp factor seem to come hand in hand in this genre.

The result was, that why I loved the adventure and marine elements, some of the stereotypes and interactions were hard to swallow. But you need to take it for what it is.

It was great to see the beginnings of a wonderful franchise. Clive Cussler writes with authority and conviction. He really knows his stuff when it comes to the marine environment – which, to be frank, is the main reason why I began reading his novels. That, and I crave a good adventure.

I know in later novels his character development and comedy are greatly improved, and female characters are painted with more than just an objective gaze or a damsel in distress. I think if I hadn’t already experienced Cussler’s later works I may have rated this lower, but have made an exception due to his legacy and the hours of wonder I’ve spent in his pages. Cussler’s writing is in part what spurred me into getting a Marine Biology degree in the first place.

So it’s only onward and upward from here. Can’t wait to see what the next adventure brings.