I happened across this series from a recommendation on Amazon.com, and after discovering it was a science fiction story set in a dystopian world involving archaeology, a kick-ass teen heroine, portalling across the universe, and the possibility of alien contact – I was sold!

This trilogy started on a promising tone. I had some issues with serendipity – you could feel the Godly hand of the author shaping the direction of the story all too frequently. It’s not to say I didn’t enjoy it, but at times, the protagonist Jarra had it too easy. Having things fall in her lap felt like lazy storytelling. But that was the biggest issue I had with this series. One other small issue it that suffered is that I did not feel like Jarra herself went through any considerable personal growth after some of the events she survived. There is some growth, which was handled really well, but towards the end she was starting to feel boring and I did not have as much invested in her.

As for the rest: I adored the aspects of technology blended into archaeological dig sites, the use of portals as an everyday transport system. The politics between worlds. I could list on and on. Edwards has created a phenomenal futuristic planet under threat from solar storms and trying to find answers in the past.

If you can overlook a little repetition in slang with the dialogue, and a certain amount of happenstance, you will love this collection. I certainly did. Additional news from Janet Edwards on her plans to write several more books in this universe has me excited. They will be set in different places on the timeline, so with new characters, I’m hoping the issues I’ve had with the Earth Girl trilogy will be improved upon.

The debut is definitely the best of the series, with a slight downward slope – in my opinion – in quality and engagement. But on the whole, pretty awesome.

It’s time to risk it all!

Jarra never wanted to be a celebrity. All she ever wanted was to gain some respect for the people left on Earth: the unlucky few whose immune system prevents them from portalling to other planets.

Except now she’s the most famous Earth girl in the universe – but not everyone in the universe is happy about it, nor the fact that she has found love with a norm. Jarra’s actions have repercussions that spread further than she ever could have imagined, and political unrest threatens to tear apart the delicate balance of peace between humanity’s worlds.

On top of everything, the first alien artefact ever discovered appears to be waiting for Jarra to reveal its secrets. But to do so, she must somehow find a way to leave Earth – or else the alien artefact will be lost forever. Is there a way for Jarra to travel to another planet? Or is her destiny only to look to the stars – but never to reach them?

I was excited to finish off this series after falling in love with Edwards’ future dystopian world and student archaeologist/military officer Jarra. With so many elements that I adored and a cliff-hanger in ‘Earth Star,’ ‘Earth Flight’ had the set up for an epic adventure and explosive end to the franchise. But it failed to meet my expectations. Though fun, I wish it could have been so much more.

Jarra as a character did not really develop much from the end of the first novel, her reactions and characteristics were pretty much the same throughout all three novels. You’d expect the life-threatening events she’d suffered through, Jarra’s personality would have matured and become wiser. I was expecting that maturity to be reflected in the tone of ‘Earth Flight,’ but was disappointed.

Fian (Jarra’s love interest) felt two-dimensional in this novel, maybe it’s because he didn’t have his own story line and was an observer to what was happening with Jarra. This was a sad missed opportunity, especially in the final book for the series.

The humour and narrative style was also starting to feel a little juvenile. Janet Edwards had to explain so much, this book fell into the cringe-worthy category of telling instead of showing. This was a book of happenstance… the events that unfolded did not feel organic, but lead by the hand of the author.

It’s not all bad – there are some fantastic action scenes that had me dodging and lifting up my feet from the floor. Pacing is great in the last quarter. I guess the points that I found detracted my enjoyment of this book stem from repetition and lengthy exposition. Moments of surprise coincidence and doors opening for Jarra were cute in the first two books, but it happened in spades in ‘Earth Flight’ to the point I actually started rolling my eyes while reading.

The ending is satisfactory, if somewhat spoony – as I mentioned before, too much happenstance.

While I did enjoy this book, and many of the delightful surprises and new scientific elements had me eagerly flipping to the next page, pacing and directive narration held it back from being truly fantastic. A satisfying yet lukewarm finale to the Earth Girl trilogy.

Overall feeling: Somebody dropped the ball…

Jarra – that girl has to fake it until she makes it! 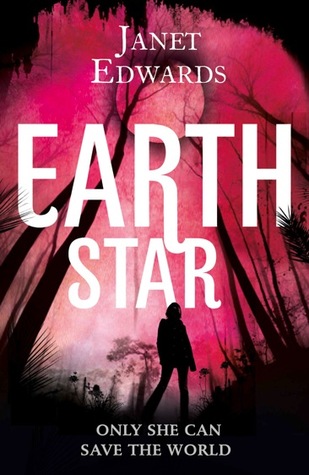 18-year-old Jarra has a lot to prove. After being awarded one of the military’s highest honours for her role in a daring rescue attempt, Jarra finds herself – and her Ape status – in the spotlight. Jarra is one of the unlucky few born with an immune system that cannot survive on other planets. Derided as an ‘ape’ – a ‘throwback’ – by the rest of the universe, Jarra is on a mission to prove that Earth Girls are just as good as anyone else.

Except now the planet she loves is under threat by what could be humanity’s first ever alien contact. Jarra’s bravery – and specialist knowledge – will once again be at the centre of the maelstrom, but will the rest of the universe consider Earth worth fighting for?

I began this series last year in October after some serendipity scrolling titles on Goodreads. This sequel one-ups the debut (Earth Girl) and still manages to indulge in all elements of sci-fi without our lead character stepping foot off Earth soil. And I can’t wait to tackle the next in this series later in the year.

I liked Jarra better in this instalment, she is more confident and ready to accept her destiny. The plot line felt a little contrived, forcing the situation to make Jarra indispensable, and many of the mechanisms in the story adding to that were eye-roll inducing. You could really feel Janet Edwards shaping the path of the novel rather than Jarra experiencing her narrative organically. But nonetheless, I really enjoyed it, much like I would an after school special.

The story is unique, and even with the author pulling the strings for much coincidence, remained true to its core predicament – there was no ‘cop out’ and magical discoveries to change the story and make it more sensational. Which I felt added to the tension throughout, making it a real page turner.

We still get more of the site excavation and its unusual technological advances that were present in the first book, and Jarra gets to use her knowledge and military background (well, faux background) to her strengths. As well as seeing some expanded group dynamics and see her stepping outside of the school environment.

There is still some lingo (and slang) which felt unnecessary, and many of the secondary characters lacked depth. But Edwards writing style possesses an easy flow that allows you to delve into the new world and enjoy the pace and action. With a few comical moments to lighten the narrative, I found I was hoping for more, and with any luck we’ll see the characters returning in the third book of the series, Earth Flight, and embellish this fun read. But overall an easy and entertaining read to spark imagination.

Earth Star still managed to surprise me, some plot twists I could see a mile away, and others came out of nowhere – so it’s not totally predictable. Still a series I’d recommend to a young adult audience with a love for science fiction. I loved the additional threat… or benign threat… that is woven into the series – masterful!